BIG BUCKS $$$$ paid for a VoiceOGraph or even just part of a RECORD BOOTH: please email RECORDBOOTH@gmail.com

A bit of the HISTORY of the VoiceOGraph Record Booth

Alexander Lissiansky is the Engineer who invented the VoiceOGraph. In the 1930s while living in Europe between Paris and Vienna Lissiansky filed a patent application to a voice machine that was the predecessor to the VoiceOGraph, first in Vienna on April 10, 1935, and a few months later in Paris. By 1938 he was living full time in Paris. (photo courtesy of the Lissance family)

Lissiansky licensed his invention to the Parisian company Bonzini and Sopransi, which manufactured what they called the REGISTON presumably from 1936 to 1939.

In March 1939, Lissiansky literally used the REGISTON as his ticket out of an increasingly desperate Europe: he brought the cutting-edge automatic recording machine with him to New York where it was immediately exhibited by Mutoscope at the 1939 New York Worlds Fair as one of their latest products. 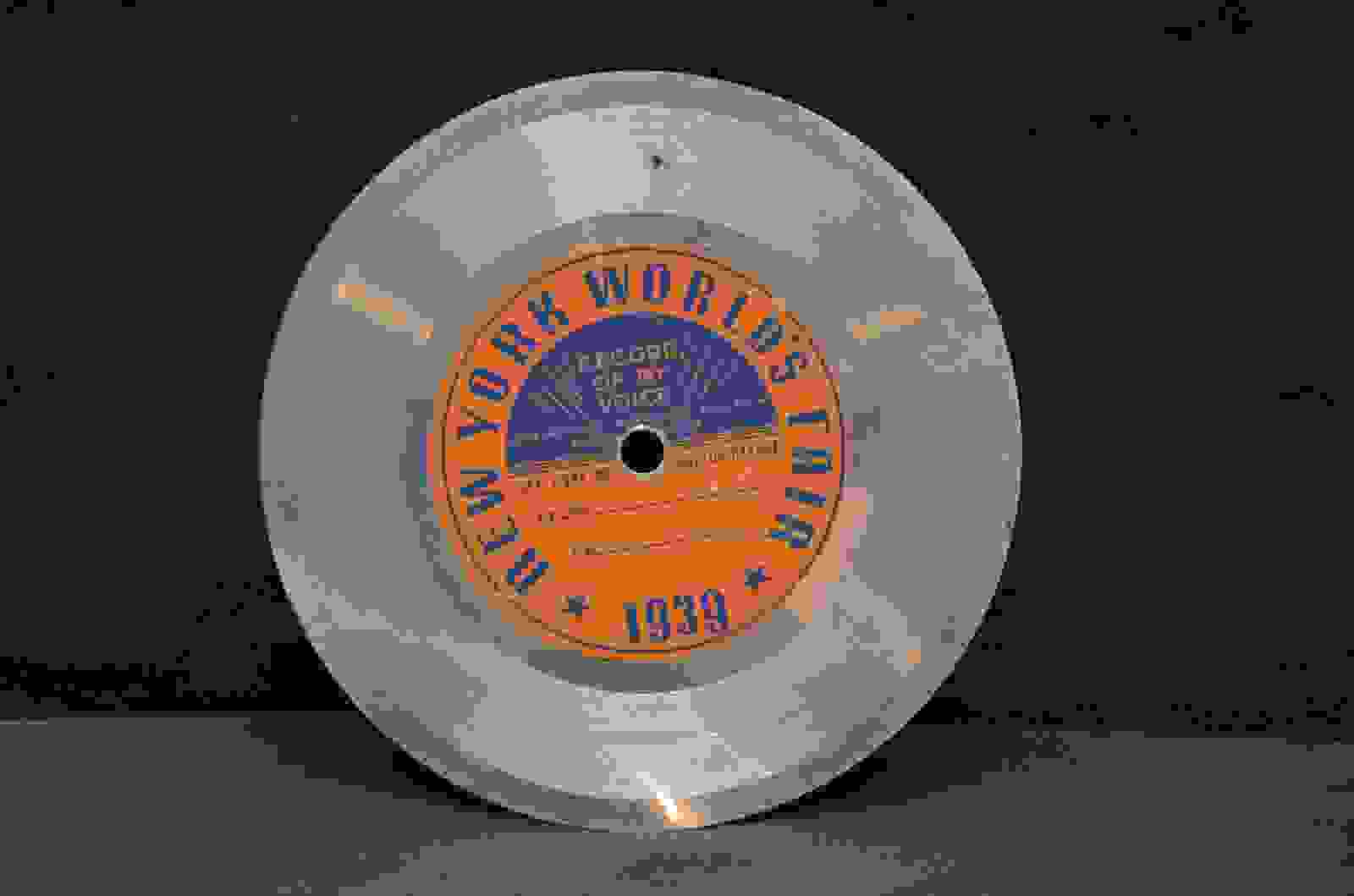 With a good bit of detective work, and the help of home movies of Mutoscope's Penny Arcade at the 1939 NY World's Fair made by Mutoscope's president, William Rabkin, obtained by Larry Bieza, we discovered that Lissansky's REGISTON (presumably rebranded) was displayed in 1939 at the Mutoscope Photomatic pavilion.

This is a screen shot from the Rabkin family film, clearly showing a REGISTON to the left-center. This machine is the very first VoiceOGraph. Just a few months later, in January 1940, Mutoscope was advertising their new Voice-O-Graph. The records made by this Registon were aluminum and required a fiber stylus for playback. The record, an envelope, and a fiber needle were dispensed from the Registon.  (photo courtesy of Larry Bieza)

On Dec. 31, 1940, Lissiansky, on behalf of Mutoscope now, filed a US patent application to what we know as the VoiceOGraph. The manual for this first model is dated 1941, and the earliest surviving metal record that we have found is dated Feb. 1, 1941, perhaps dating the commercial introduction of the Voice-O-Graph in the US. The 1941 model included a walk-up configuration with a curtain. The microphone was a telephone handset, as it was in the Registon.

Notably, there seems to be very few surviving VoiceOGraph records prior to May 1943, and those that do survive appear to be limited to NY City, leading to the possibility that the 1941 model did not have wide distribution outside of NYC prior to Mutoscope's transition to supporting the war effort.

Records from this first model VoiceOGraph are metal-based with a lacquer coating, and have a label that is red (top 1/3) and yellow (bottom 2/3). It is likely that not many of this first, 1941 model Voice-O-Graph were made, not only because none are known to survive, but because by mid-1942 Mutoscope was advertising in The Billboard that they had converted to manufacture for the war effort.

Mutoscope introduced the first wide-spread version of the VoiceOGraph record booth, a wooden cabinet, in 1943. The earliest records we have collected from this 1943 model are dated May 26, 1943.

In late 1946-47 a slightly updated but by far the most successful and popular version of the VoiceOGraph record booth was introduced. In the 1947 model the overhang above the door was shortened by a couple inches, and the three round glass cutouts were eliminated. A central wood strut adjacent the speaker panel was widened by an inch or so to allow enough width for the microphone to be mounted behind the wall. The amplifier was changed, using a relay instead of a physical switch to alternate between cutting mode and playback mode. The turntable motor was updated as well to what likely provided a more reliable 78 rpm speed.

Around March 1947 a 'DeLuxe' model of the VoiceOGraph was introduced in an art deco style metal cabinet, but internally using the same mechanism as the wood model.

The DeLuxe model had a coin slot to drop your coins into (factory selectable to be 25c, 35c or 50c), instead of the coin slide of the wood model.

Very soon after introduction of the 1947 DeLuxe VoiceOGraph, on June 3, 1947, Alexander Lissiansky quit Mutoscope, and in 1949 changed his name to Alexander Lissance upon his citizenship in the US. In his later years in the 1960s, Lissance made frequent use of a reel-to-reel recorder . . ..

The VoiceOGraph record booth became so much a part of 1940s and 1950s pop culture that the president of Mutoscope crowned movie actress Gloria Humphries as "Miss Voice-O-Graph" in 1947, complete with a tiara made from blank VoiceOGraph records! (and they say that P.T. Barnum was the greatest showman...!)

I was excited to discover that the sample record on display inside my very first VoiceOGraph - a 1943 model - was made by the factory workers at International Mutoscope Company in Long Island City, NY !

The VoiceOGraph record booths were a workhorse. When discovered a few have shown evidence of having been operated for 20 or 30+ years, with their use counters usually indicating anywhere from 16,000 to more than 32,000 records having been made!

This is audio from the factory workers in 1947 who made the 1947 VoiceOGraph that is now in public use in Nashville at Jack White's Third Man Records. Neil Young would later record an album in this Record Booth, and sing in it on the Tonight Show with Jimmy Fallon!

With over 15 years of experience Patent Attorney Bill Bollman has been lovingly resurrecting long-abandoned VoiceOGraph Record Booths from oblivion. Bill is a former Design Engineer from Bell Labs/AT&T, and has applied that experience to the restoration and upgrade of VoiceOGraph record booths. Today, those lucky enough to have a restored, upgraded VoiceOGraph record booth are able to make a custom 'vinyl' record a few minutes in length with a recording quality that is far beyond anything that the VoiceOGraphs were ever originally capable of.

If you have any interest in a VoiceOGraph Record Booth, or have any part of a record booth, by all means contact Bill at RecordBooth@gmail.com !

The VoiceOGraph can operate on US quarters, European or other coins, OR custom made tokens.

Over the decades movies have reflected the experience of a Record Booth. See for yourself!

Want to buy a VoiceOGraph(R) record booth, or have one to sell?